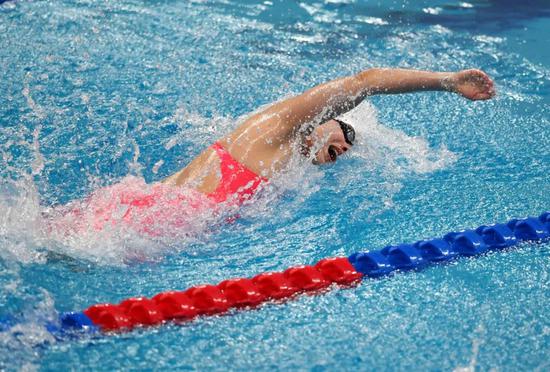 Recalling the scene at the time, Zhang Yufei said: "The audience was very silent and there was no sound. When I got to the side, I looked back at 52 seconds 9. I thought I was wrong, so I looked back and confirmed it again. Unbelievable, very excited! It may be the freestyle record that I broke!" Breaking the national record undoubtedly gave Zhang Yufei more confidence, "This is the first record I broke since participating in a swimming competition. I hope this is a good start, and I will strive to stay in the future. More and more records belong to me."

In the 100m freestyle final held on September 28, Zhang Yufei and 18-year-old Shandong team rookie Yang Junxuan were both strong contenders for the championship. Zhang Yufei led Yang Junxuan by 0.34 seconds in the 50 meters ahead, but lost to his opponent in the final sprint stage. In the end, Yang Junxuan took the lead with a score of 53.57. Zhang Yufei finished second with a slight disadvantage of 0.02 seconds. Although he failed to continue to create a "miracle" to win the finals, Zhang Yufei's performance is still remarkable. Both her and Yang Junxuan's results have reached the Olympic A standard.

Physical fitness is Zhang Yufei's strength, and she is also a pacesetter in physical training in the national swimming team. In the fitness test before the competition, Zhang Yufei scored 45 points, ranking second among the top 16 players in the women's 100m freestyle preliminaries. Zhang Yufei believes that the most obvious manifestation of the strengthening of physical training is in his main event, the 100-meter butterfly. In the previous team test, Zhang Yufei achieved a personal best of 56.29 seconds in the 100-meter butterfly, which also gave her more expectations and confidence in the upcoming 100-meter butterfly preliminaries on the 29th. "I have always had ideas for the 100-meter butterfly, and I have had ideas since March of this year, so I have been looking forward to this competition, hoping to swim out of my goal." (Chinese Sports News Image reposted from Xinhua News Agency)